Lobsters are Hemostatic Agents Too, Part I 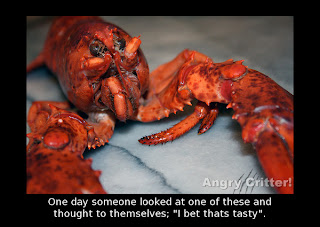 You know there is something to be said about the ingenuity of our current hemostatic agents. I mean seriously, who would've ever looked at a lobster and thought, "Hmmm, I bet that's going to make a great hemostatic agent.

Well, some smart and now rich beastard did, and as a result we have Chitosan, one of the most common hemostatic agents on the market. (Chitosan is derived from chitin found in the exoskeletans of crustaceans.)

Another brilliant hemostatic agent made from something you wouldn't expect is Arista, which is a polymer made from potato starch. (Image taken from http://www.flickr.com/photos/beckendorf/ )

So we have hemostatic agents from sea cockroaches and Idaho spuds. In addition to those, there are less commonly known but just as ingenious hemostatic agents that deserve attention. The following is a starter list of the various products out on the market. 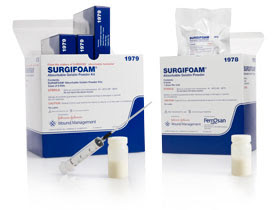 Gelatin Foams:
There is always room for jello.

Normally, I like to promote gelatin powder, which is a nonsterile, but effective hemostatic agent. Why? Because it has a few added benefits:

First benefit: You will not get hauled to the nuthouse for using powdered gelatin as a clotting agent. "I swear she said a lobster would stop the bleeding!" equals time in a loonybin.

Second benefit: It is a fast clotting agent that is very easy to buy. Seriously, you don't have to drive down to Mexico and beat off drug cartels to get it.

But for the purposes of this post, I am going to talk about the more surgical grade gelatin foams. Who doesn't love a good foam? Gelatin foams began to be used in 1945 and were manufactured from the gelatin found in animal hides. These gelatins were whipped and baked until the formed a sponge foam.

They come as a powder which you mix with a sterile saline solution (preferably) or sterile water to form a paste. 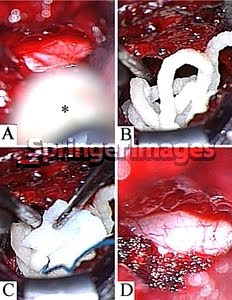 These products include: Gelfilm, Gelfoam, and Surgifoam. Gelatin foams create a type of matrix that instantly clots a wound site. These are used mainly for small blood vessel bleeds, bone bleeds, and venous seeping.

The benefits are that they are absorbed by the body within 4-6 weeks, have a neutral pH, and are nonantigenic or don't cause antibody reactions.

These can be used with oxidized cellulose wrapping. (This is shown in the Springer image to the left)

There are some cautions with these products. Gelatin foams swell. So, they should not be used in closed spaces within the body, especially near nerves.

Truthfully, you shouldn't be sticking anything, even your hands, in people's bodies to begin with if you are not a trained physician. This goes double for procedures in wilderness and disaster environments. So keep your hands out of other people's orifices. Leave that for us doctors: We get selfish over those things. "My prostate exam. Mine. Mine. Mine." 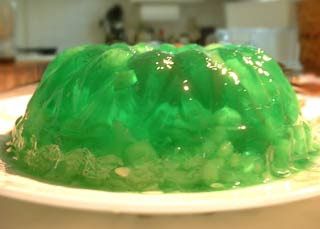 There are particular surgical techniques that we use gelatin foams for which include penetrating traumas where organs are pierced through. We use an oxidized tubular plug filled with gelatin foam, which is held intact by titanium clips or sutures, and insert it into the hole. I'd tell you more but the rest is a trade secret. ;)

[Note: Trade secret is another term for "I'm not telling just to prevent a bunch of doped teenagers from trying it with their grandma's green jello and a straw."] (Image taken from http://simplyrecipes.com/recipes/grandmas_pineapple_cucumber_lime_jello_salad/)

One of the companies that manufactures gelatin foam products is the Pharmacia and Upjohn Company, which is a subsidiary of Pfizer.

I still prefer gelatin powder, because it's around the house. In fact, I have used a mixture of gelatin powder, a few drops of sterile water, and some topical antibiotic on a baby's hemorrhaging wound and it worked effectively within seconds.

For more information on Gelfoam. 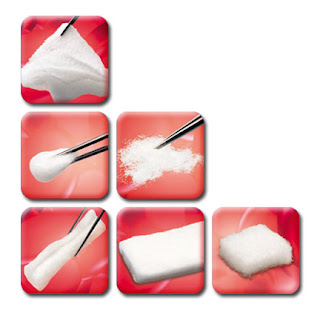 These products are called Surgicel Nu-Knit and Surgicel Fibrillar. Developed in 1942 from decomposing wood pulp to regenerate cellolose fibers, oxidized cellulose conforms more rapidly to its surrounding environment than any other hemostatic agent. (Image provided by the medical kit company Baycan http://www.baycanmedikal.com/eng/index.php?option=com_content&view=article&id=14)

Oxidized cellulose creates a clotting matrix that has a consistency similar to cotton. With its low pH, oxidized cellulose has a great antibacterial effect. It doesn't stick to surgical instruments or gloves and it typically dissolves in the body in 2 to 6 weeks.

Do not moisten before use, because it has a greater hemostatic capability when it is dry.

Cautions: It may cause inflammation of the surrounding tissue, so don't use it anywhere near nerves. And for the love of all that good and holy, don't use it on hemorrhoids; it's not a pretty picture.

It is manufactured by Ethicon, Johnson & Johnson. 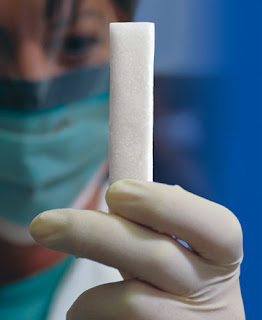 Currently, surgeons use a nonabsorbable mixture of paraffin, isopropyl palmitate, a wax-softening agent, and beeswax. They apply is to the cut edges of bone to stop bone marrow bleeds. It blocks the bleeding channels in bone marrow, and is easy to handle. You seriously just wipe the stuff on the bone edge like a jelly puddy, but after you are through clotting the wound remove as much of it as possible to prevent bone granulomas from forming (only in 2% of cases).

I have seen bone wax used to stop bleeds from the cut edges of the sternum during cardiothoracic surgeries.

Ostene:
This is a pluronic copolymer blend that is a biocompatible alternative to bone wax. They look and feel the same. The use is similar to bone wax.

The only difference is that ostene is water soluble and bone wax isn't.

This is marketed by Ceremed Inc. in California. 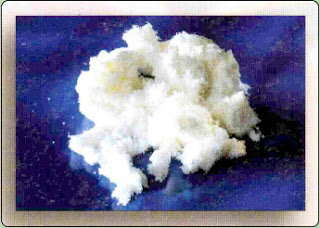 You know when a group of hemostatic agents have enough different names to put a CIA agent to shame, they are seriously cheap to create. Some of the products within this group include Helistat, Helitene, Ultrawrap, Avitene Ultrawrap, Instat, Avitene, EndoAvitene, Avitene Flour, and Avitene Ultrafoam. (Image is of Avitene Flour taken from Bristal Healthcare which is a distributor of these products http://www.bristalhealthcare.com/avitene_63.html)

These products are made from cows. No. Rubbing a cow on your wound doesn't work either.

Microfibrillar collagens (MFC) work by increasing the surface area for platelets to react upon. Platelets are blood cell fragments that are involved in clotting. Hemostatsis occurs within 2 to 5 minutes. It doesn't swell and is absorbed within 8 weeks.

Because MFCs work through platelet clotting, these are not effective in patients who have thrombocytopenias. On the other hand, it works exceptionally well in patients with normal platelets even under massive amounts of heparin.

Other facts: MFC is most successful in treating a large oozing bleed. It sticks to gloves, so it should be applied with DRY surgical instruments. Also, remove excess MFC from the wound site because it binds to nerves and dermatome surfaces causing pain and numbness.

Have a nice day!

This is Christine your friendly neighborhood medical blogger signing off. TTFN!
Posted by Dr. Christine Princeton, D.O. at 9:51 AM