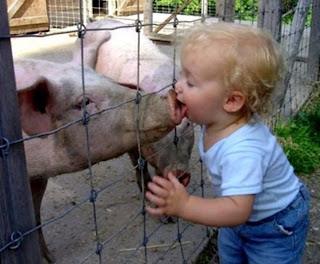 I know it has been a over a month since I posted last, but I have been trapped in the ritual of preparing for the medical licensing exams.

I figure since there has been great interest in the upcoming flu season that I should take a break from my studies and talk about some pork. Not necessarily the other white meat, but the swine flu, or rather H1N1, that presents a problem to this year's fall festivities. (picture from http://www.ktis.fm/blogs/lisa/2009/04/29/where-swine-flu-comes-from/)

But, before I write a post about how to cope with the H1N1, I have to do some myth busting. Sorry, it's not that I don't love you mythophiles and legend lovers, but I have to do this; it's for your own good. We must accept that some myths no matter how fascinating, are a bunch of .... well, hogwash. :)

I personally love this myth. Can you imagine how many calories we would save if pork actually caused the virus? No wait, how many scary pork-flavored meals we could avoid!

"Ahem, I'm sorry Aunt Bertha; I'd love to eat your pork belly chop stew, but I'm cutting back on the swine flu. Doctor's orders. No more bacon butts for me." (picture from soda.com)

So truth be told: you can't get H1N1 from eating porkchops.

Dr. Ed Hsu, an associate professor of health informatics at the University of Texas Health Science Center indicated that "There is no scientific evidence or literature or any studies that suggest that one contracts H1N1 virus through eating pork or handling pork products." (abcnews.go.com)

In addition, the Food and Agriculture Organization (FAO) of the United Nations has stated concerning the virus, "Given current facts and scientific understanding, consumption of pig meat does not bring any increased risk to the consumer." (http://english.peopledaily.com.cn/90001/90777/90856/6649432.html)

Too bad the FAO forgot about the increased risks of hypertension and obesity from eating buckets of bacon, but that's another subject entirely.

Furthermore, Agriculture Secretary Tom Vilsack (www.foxnews.com) has made a general statement to Americans that the H1N1 is not a food-borne illness an that it has absolutely nothing to do with eating pork products. So you can pig out on all the sausages and hot dogs you want. You're more likely to get the H1N1 from the package the dogs come in, than the little pork guts themselves. 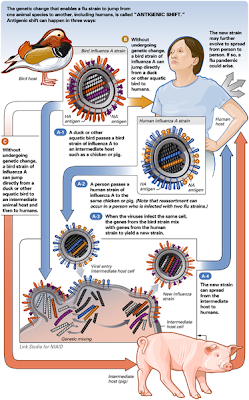 The real reason why H1N1 began to be known as the 'Swine Flu' was that it manifested like the Asian and European swine influenzas that were contracted first by hog herders.

Yet, it is true that pigs are intermediate hosts for a number of influenza strains.

Our little piggy friends first mutate the strains within themselves, and then are so obliging as to share the new human-loving strains with us. And who said that pigs were selfish animals?
(picture from National Institutes of Health http://www3.niaid.nih.gov/NR/rdonlyres/3D377A8B-747F-480A-832E-02A8ED9D1B3C/0/AntigenicShift_HiRes.jpg)

In reality, the H1N1 is like the Frankenstein of influenza viruses. After analyzing its genes, scientists have discovered that it is a never-before-seen mutated combo of the genetic components of at least four different classes of flu viruses.

It is true that health officials have seen conglomerates of virus strains before, but "never such an intercontinental combination with more than one pig virus in the mix." (http://centurean2.wordpress.com/2009/04/29/why-call-it-swine-flu-when-its-a-mixture-of-avian-human-and-swine-viruses/)

Yep, there it is our old buddy the Bird flu, back to bite us in the pork belly. And you thought the Avian flu had gone without even saying, 'hello.'

And in a nutshell: a pidgeon fell in love with three little pigs, and now we have the H1N1, formally the artist called Swine flu.

I just have to say in response to this myth, "What the heck?!"

One question: who came up with the idea that going to a party with a bunch of people infected with the H1N1 is a good thing?

For those of you who haven't heard of this myth: Swine flu parties are gatherings of non-infected people with infected people for the purpose of catching the swine flu early in the season.

Okay, I don't know who out there is propagating the fantasy that people are better off if they catch the flu "before it mutates in the fall." But... wow! I'm impressed at their creativity. That is about as good as the cultural belief in some parts of Africa where if a man sleeps with a pure virgin, he'll be cured of AIDS. (Sorry, to all those that follow the virgin-AIDS-cure belief, but it's entirely and deadly false. But if you still want to believe that, I've got some Ocean front property in Ohio that you might be interested in.)

Back to the subject at hand: Yes, there are some people out there in la la land who somehow believe that if they inoculate themselves now with the virus that they will be protected from a worse and more mutated strain in the fall. 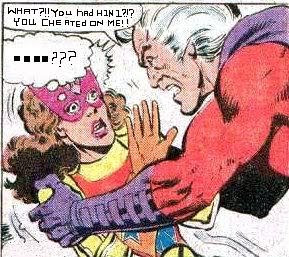 Well, I hate to burst their bubble, but the H1N1 has already mutated. It's the mutated freak of mutations. All mutants shun it. If Magneto's wife had this mutated virus as a child, he would divorce her for cheating on him with the monster from the deep lagoon. (Note: Magneto is a Marvel comic book character that is a mutant-rights activist to a major extreme...[picture from photobucket.com])

It probably is best to avoid the H1N1 altogether.

Myth 3: H1N1 is more benign than the seasonal flu

Basically, this is another pipe dream. Dr. William Schaffner of Vanderbelt University and expert on influenza strains explained that the H1N1 is "not a harmless infection. We anticipate that whatever it does this summer, it's likely to be a major player in the fall, and when something this new and unpredictable shows up, we are all well-advised to do our best to prepare for it." (http://abcnews.go.com/Health/SwineFluNews/Story?id=7691400&page=1)

While the seasonal flu kills nearly 36,000 per year, the H1N1 is estimated to kill up to 90,000. That's nearly three times as many people. Can you see now why Swine Flu Parties are a bad idea?

The President's Advisory Council (PCAST) has released a report indicating that the worse case scenario for the United States could be as many as 30,000 to 90,000 deaths from the H1N1 this fall, with 40% of the population contracting the virus. (http://www.examiner.com/x-12837-US-Headlines-Examiner~y2009m8d25-H1N1-or-Swine-flu-deaths-could-reach-90000-this-fall) Keep in mind that these projected numbers are considered to be in addition to the 36,000 that die from the seasonal flu each year.

While somewhere in between 5-20% of Americans catch the seasonal influenza, H1N1 is projected to affect nearly 30-50% of the population.

Not that I want to end on such an unhappy note, but I have licensing exams to attend to. I do fully intend to get to the good stuff of H1N1 preparations in my next post. So stay watching.