Indoor Air Quality: Plants That Can Save Us

Assuming that your house is still standing after a disaster and the authorities haven't attempted to evacuate you, the best thing for you to do is to stay indoors with your air vents sealed.

For instance, in the event of an earthquake, a good amount of dust is stirred up into the air, bringing with it a number of soil fungi that have been shown to cause lung infections in earthquake survivors, such as coccidioidomycosis immitis which is the cause of San Joaquin Valley Fever. (Refer to Jacobs, A.V. and Leaf, H. (2007). Fungal infections of the lung. Current Infectious Disease Reports, vol. 1, pp. 89-98 and Torre, J. and Richard, A.J. (2008). Coccidioidomycosis, emedicine, http://emedicine.medscape.com/article/781632-overview).

In the event of a nuclear fallout, there is the radiation factor. No biggy, right? Well, that's because you already know that it is best to go into your basement and seal off any openings to the outside in your home and stay down there for at least 3 weeks. (Note: Earthquake and Nuclear preparedness and disaster response will be discussed in more detail in a later post.)

So how do you survive in an air tight environment for a few weeks? Yep, you guessed it: Plants! 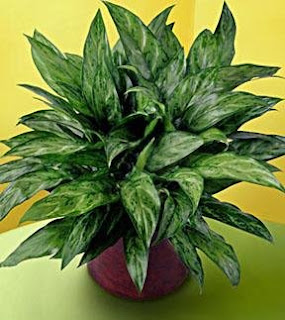 Not only do plants convert carbon dioxide to oxygen, they also filter harmful substances from the air such as formaldehyde (man, plants would've been great to have around when I was in Cadaver class), benzene, and trichloroethylene. So in a nutshell, plants function as amazing air pumps and humidifiers. (Aglaonema modestum picture taken from florists.ftd.com)

In 1989, NASA scientists Dr. B.C. Wolverton, Anne Johnson, and Keith Bounds conducted a study to find an economical way to purify air for the extended stays that astronauts made in space stations. (http://www.ssc.nasa.gov/environmental/docforms/water_research/water_research.html)

This study found that a particular fifteen houseplants performed better at air filtration than was ever expected.

Wolverton stated that, "Plants take substances out of the air through the tiny openings in their leaves (stoma). But research in our laboratories has determined that plant leaves, roots and soil bacteria are all important in removing trace levels of toxic vapors. Combining nature with technology can increase the effectiveness of plants in removing air pollutants. A living air cleaner is created by combining activated carbon and a fan with a potted plant. The roots of the plant grow right in the carbon and slowly degrade the chemicals absorbed there."

The plants were also found to be helpful to air-tight office buildings. For instance, in most office buildings, trapped pollutants produce what is often referred to as Sick Building Syndrome. (http://en.wikipedia.org/wiki/Sick_building_syndrome)

The signs and symptoms of this syndrome include: fatigue, nausea, confusion, flu-like symptoms, sinusitis, anxiety, pneumonia, headache, lack of concentration, edema, allergies, and insomnia, irritation of the eyes, nose and mouth.

Now if you're wondering how formaldehyde, benzene, and trichloroethylene get into your house, they do it like every other criminal, they pick the locks. No really, they are more like vampires, you invite them in... by bringing paper, cardboard, particle board, insulation, paints, oil solvents, adhesives, inks, varnishes, perfumes, deodorants, body lotions, cleaning products, smoke, pesticides, synthetic fabrics, carpets, detergents, etc. into your home. Darn, there goes the good things in life.

So here you are stuck in your house, trying to avoid the nuclear fallout like every other normal, non-mutant person, and all you have is books to read and walls to paint. Then you get that cleaning urge because you've got nothing to do except stare at the dust collecting on all the DVDs you can't use because the power is out. So, you clean and of course you have to varnish what remains of your furniture... and now you need to apply three layers of deodorant because you stink from all that work.

But then, suddenly, one of the radiation mutated cockroaches from the underworld just ate your dog and you have to whip out two cans of industrial strength bug spray because there is no way in Tartarus that your shoe is big enough to kill that thing. What do you do? 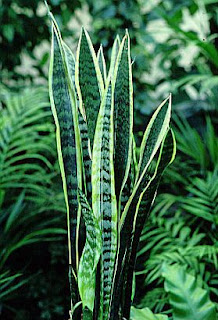 In other words, you prepare with plants. The following is a list of the top 15 plants that NASA found were helpful in filtering indoor air: 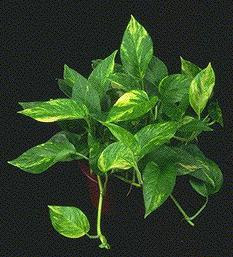 1. Philodendron scandens 'oxycardium,' or heartleaf philodendron (This is that plant that never seems to die, no matter how much you lack a green thumb. Picture is to the left. plantoftheweek.org) 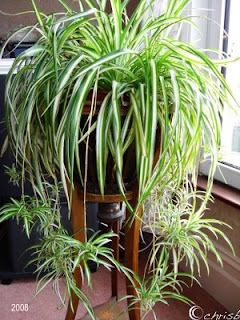 5. Chlorophytum comosum, Spider plant. (I love this plant; you only have to water it once every two weeks! Perfect for times of disaster. www.webmaster-forums.net)

NASA suggested that there should be at least two plants per 100 square feet, or two plants per a small room/office. The results recommended 15 to 18 houseplants, grown in 15cm containers or larger, to filter an average home of less than 2,000 square feet. My grandma seems to apply the more is better rule: her kitchen looks like the rain forest.

For those of you whom are interested in which plants filter what chemicals....

Well, again, I better sign off for today. Again, i must hit the books.

May you enjoy your time with your Mother-in-law's tongue.

Here is a list of resources for more information on NASA's study, including the pdfs for the day:

http://www.ssc.nasa.gov/environmental/docforms/water_research/water_research.html
Posted by Dr. Christine Princeton, D.O. at 8:43 AM