Carbapenems: Who Comes Up With These Names?

There's always a scientific reason why drugs are given certain names: It's called a bored scientist with too much time on his hands is trying to win a game of Scrabble.

One scientist was up late one night watching the movie Maverick and the antiviral drug Maraviroc drug was born. 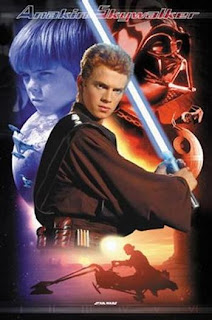 A Trekkie fan created the drug Android (an androgen receptor antagonist) after Data and his rival the Star Wars fan named the arthritis drug Anakinra after the infamous Jedi. May the force be with your anti-arthritic medication.

And if that's not fun enough, scientists get even more creative by stringing together words to form a name, just because we aren't confused enough by the goofy ones already out there.

So there are the ones named after a phrase such as bend-over-must-sting like the alkyating agent that can only be administered by shot named Bendamustine (the company even goes as far as giving it a trendy brand name of Treanda).

I'm just waiting for a scientist whom after eating a couple moldly sandwiches, gives up on a game of Scrabble to do a marathon of Lord of the Rings and youtube. Here could be the name of the newest antipsychotic medication: "Mypreciousmypreciousstarwarskidmeetswizisin."

Then there are the pharmacological agent names that are just plain cruel. These are the ones created by evil mad scientists that prefer torturing people with oxymorons.

My favorite of this category is the colonoscopy preparation called "GoLYTELY." Nothing is more of a rude awakening than this name. If it's not bad enough that you have to go in for a camera the size of Florida up your rear end, the mad scientist in his great evilness decided to psyche you out with the name "Go Lightly." Now, it's a bold-faced dirty lie; there is no "lightly" about about it. In fact, historians believe that Go LYTELY used to be an explosive device created by secret agents to turn vegetarians into salad shooters.

But at any rate, some socially-poor-but-economically-rich schmuck coined the term Carbapenems from the phrase "carve a pretty penny out of them" and we have a really cool class of antibiotic drugs; some of which are quite expensive.

Like, I mentioned in the last post: Carbapenems have cross-allergies with penicillins. So if a penicillin puts a rash spawned by Hitler on your butt then carbapenems try to match it with a rosy rash of their own.

The Carbapenems are a class of antibiotics that attack the cell wall of susceptible bacteria. 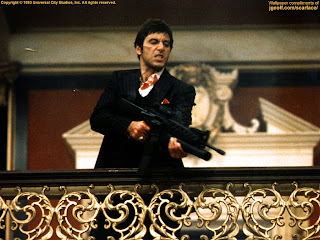 They cover a wide spectrum of bacteria. Carbapenems are kind of like Scarface with his big-A machine gun, shooting up everything. "Say Hello to my little Carbapenem!"

Seriously, Carbapenems are the big guns, saved for the life-threatening cases. And following the grand tradition of all hard hitters, they are administered IV. So, you have to get your butt shot before you feel their effects.

In a few words, they cover the gram-positives like Strep and Staph, similar to the penicillin group, but in addition to that, they also cover some seriously nasty gram-negatives and a few strains of Pseudomonas. But they don't kill Legionella or MRSA. Too bad. Oh darn, the elderly are going to have to avoid sitting near old air conditioners and MRSA sufferers are going to have to find some other drug. Yet they kill anaerobes! So, they are good for bullet wounds and some scary stuff that that incubates in the gut. Woohoo!

The one major flaw with the Carbapenem class is that they can cause dangerous seizures in patients with kidney problems. Have bad kidneys? No Carbapenems for you!

Ertapenem: Does not cover Pseudomonas. It's the only Pseudomonas-lazy Carbapenem out there. It's so lazy that it doesn't even have the gram-positive bug coverage that the other drugs in this class have. So if you're a burn patient with Pseudomonas or have a serious gram-positive bacterial infection, then don't bother with this drug. It will just disappoint you. You'll end up hating each other and heaven knows if it will try to sue for your house. But it is a pretty cheap date, if you're not into spending a lot of money and don't care about Pseudomonas.

And you might as well know that cheap dates like Ertapenem are often antisocial losers: it hates to work with the bipolar medication valproic acid (Depkote) and the drug Probenicid. They fight a lot.

Ertapenem does have its good points: it is a category B drug and is relatively safe to take during pregnancy and while breast feeding. Also, it loves kids older than 3 months old. So it's kid friendly.

Not at all good for meningitis, but is awwwwwesome for intra-abdominal infections, urinary tract infections (use as last resort), community-acquired pneumonia (if Azithromycin doesn't work), and wound infections.

Normal Adult dose: 1 gram of Ertapenem by IV once a day over a course of 5 to 14 days depending on the severity of the condition.

Imipenem: Trade name Primaxin, this Carbapenem includes Cilastatin. Not to be used with antivirals or cyclosporine. Also, not good for our pregnant friends, but loves children. Takes walks on beaches in the moonlight and is not so antisocial as its cheap-A brother.

People that have heart valve problems may get Streptococcus mutans/viridans endocarditis from visiting the dentist. So dentists generally give prophylactic antibiotics to prevent it. Imipenem is used to cover these difficult cases of endocarditis and it is administered intravenously.

Normal adult dose: 500 milligrams by IV given every 6 hours over the course of 10 days.

Side effects include confusion, drug fever, psychic disturbances, and in patients with kidney failure, seizures. So don't give it to Psychics with renal failure that want to drive buses.

Meropenem: Also called Merrem IV because it is given only by IV, this Carbapenem has some serious side effects like Stevens-Johnson Syndrome and Angioedema. Yeah, I hit you up front with those. I didn't wait to get you all excited about this drug, make you fall in love with it, and then smack you down with the "this drug can kill you if not used properly" statement. See, I care about your feelings.

One phrase for this drug: Kicks the crap out of meningitis. Yep, this one takes the Louisville Slugger and beats the holy snot out of any gram-positive bug that even dares to venture into your meninges. This is the drug that you would want to marry if you suddenly get "the headache that kills" and trust me, it won't disappoint you. It also can be used for complicated pelvic/abdominal infections such as appendicitis and peritonitis as well as serious skin infections.

Normal adult dose: 1 gram by IV per every 8 hours over a 10 day course.

But as you know, with any classy date, there comes a hefty price tag. This is one expensive drug. Sell your car and your house... and maybe a few of your children and you can pay for this Carbapenem, because it will "carve a pretty penny out" of you.

So that ends my discussion of Carbapenems. There are no more in the class. I think Ertapenem's antisocial behavior has ruined the chances of any other antibiotics joining them. Well, technically there is Dorkipenem (Doripenem) but he's the really really really expensive brother.

The following is a good site concerning wound infections, bacteria, viruses, etc. that is totally worth reviewing:


For all those Star Wars Scientist fans out there when Scrabble isn't good enough: