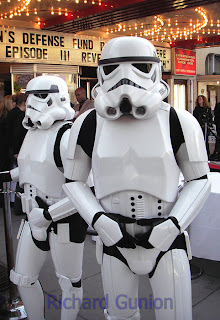 Okay, I am writing two separate posts at the same time. Do you realize how brain fogging that is? ;) It's like listening to a bunch of Irishmen after they downed 20 Guinness, while eating snapper candy. It just shouldn't be done. ;)

Just for fun, I want to state here a few of my favorite questions:

Why are most politicians evil? Because in the job description it says, "several years of experience in evil-doing, lying, cheating, and stealing required for employment in this position". ;)

Why are evil dark overlords politicians in training? Because everyone has to have retirement plans. See required politician experiences.

What do storm troopers wear under their uniforms? Smiley face boxers and t-shirts that say "I love carebears." It's totally obvious. (image taken from http://www.shutterpoint.com/Photos-ViewPhoto.cfm?id=184251)

But the question of the day is:

What are some natural anesthetics? This was the great inquiry made by a wonderful blog follower that I decided to write this post in response to. (I'm biased: I love my blog followers.)

So let's start with a little medical history. Okay, I think I just lost half of my viewers with the "history" comment.

Now, I am not an expert on the natural ways of numbing, so I grabbed my knapsack, couple of bottles of generic filtered tap water that I was charged a buck a piece for, and went on an epic journey to research natural pain killers. [First, I looked at historical analgesics. You know, there is something to be said about some wives' tales: just not the ones that told knights that they needed to be sewn into their armor for good luck. Funny, but so wrong on so many levels.] 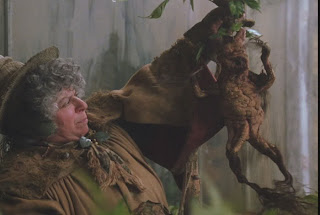 Anyway, after that search, I discovered many things. One, Harry Potter was right: people did actually believe that mandrake plants killed you with their screams. (Please enjoy this refresher video of Mandrakes. Mandrake - Harry Potter and The Chamber of Secerets).

And two, our ancestor's were whacked out of their gord.

I am not kidding, this is the first time that I can honestly say, "what the heck were our ancestors were thinking?!"

Seriously, I wonder how any of them survived long enough to create the next generation.

Most of the "numbing methods" they applied centered around doping themselves up enough hallucinogens to ride magic carpets (now, we know why they have those freaky fairy tales), hitting each other in the head with massive hammers, downing keggers of beer, and eating plants that are lethal.

Well, that explains a lot of historical events.

Hitler being voted in. Definitely a bunch of people on natural pain drugs. The voter cards looked blurry under the flying spots and fairies. They mistook Hitler for "hit here." (Actually, "hier" in German, but eh, details, details.)

The Third Crusade. It was all in the mead. Who else but drunks would head into the hottest, nastiest area of the world wearing heavy armor and start a war?

Atlantis. They took the Bugs Bunny approach to numbing methods and beat each over the head with mallots, then became lunatics thinking they could take over the world. Why else did God send their island into the ocean?

At any rate, the ancient methods for pain reduction were in fact:

1. Halluciongenics such as opium, and cocaine
2. Alcohol (largely whiskey and wine)
3. Striking the patient in the head (either by placing a helmet over the person's head and hitting them with a mallot or by giving them a good punch to the jaw. They lost a couple teeth, but hey, they were unconscious during surgery).
4. Mandrakes (a potentially lethal plant from the nightshade family)

Well, we can't knock them for trying. In all honesty, we pretty much use the a few of the same things for pain relief.

The analgesics Lortab and Vicodin are semi-synthetic derivatives of the opioid family. (Codeine and thebaine are two of the naturally occurring opiates used in the creation of these drugs.)

And come on, I know there are a few of you out there that wanted to deck that guy that was screaming in pain. (Please see reasons why not to go into medicine). 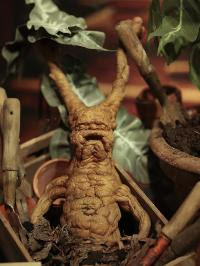 Anyway, let's discuss mandrakes (Mandragora officinarum). These are members of the nightshade plant family (Solanaceae) and genus Mandragora. [Included in the nightshade family are potatoes, tomatoes, peppers, and eggplant.]

The genus Mandragora, on the other hand, realistically should be included in the hallucinogens category, but I want to give them their own attention.

The mandrake contains alkaloids such as scopolamine, atropine, and hyoscyamine. These are potentially deadly substances. So it wasn't the screaming that killed them, it was the alkaloids.

Atropine is used as a treatment for organophosphate poisoning (pesticides) and used to resuscitate patients with severe bradycardia. (For more information see: http://www.cvpharmacology.com/antiarrhy/atropine.htm and http://en.wikipedia.org/wiki/Atropine).

Not only are the Mandragora potentially deadly, they actually promote inflammation and pain. They produce a number of alkaloid chemicals that can range from irritating to lethal.

So why am I telling you this? What is this historical lesson good for?

One, our ancestors were a bunch of neanderthals when it came to medicine. But... although crude, the doping, drinking, and clobbering approaches, were actually affective.

Two, mandrakes, instead of being used for pain relief, can be used to treat organophosphate poisoning which is a life-threatening condition.

Lastly, I am still looking for natural anesthetics that are safe and available for disaster medicine kits. Sorry. I wish I could have found something more helpful. Apparently, the best things that we can store up are the prescription analgesics and local anesthetics.

So far, I have been unable to find any natural ones that have been scientifically proven to be safe and to actually work. For the sake of my viewers, I will keep looking.