It is amazing how mankind strives for the unattainable treasure, works for the impossible dream, labors to overcome all obstacles... Wait, who am I kidding, we look for the easy way out.

It's all about convenience. Heck everything has a drive through nowadays. Fast food, pharmacies, grocery stores, weddings in Vegas. Yeah, it's true: you don't even have to get out of your car to say your "I do"s. See: Convenient.

It all started back when some misguided, drunk aliens crash landed their UFOs on Earth and mixed their genes within society, creating a techno-savvy but lazy generation that doesn't care about the consequences as long as the effort is minimal and the execution is fast. ;) It also explains why a vast majority of people drink enough alcohol to kill their livers, but that's another story.

Don't worry: the well-paid government scientists in Area 51 are working hard to this day to find a cure for the laziness gene. Unfortunately their efforts are thwarted by undercover aliens who created the Clapper, remote controls, those reaching sticks with the pinchers on the end, and superglue.

And as we all well know: the easy way is not always is the best way.

The Clapper. Result: A bigger pant size and annoyed spouses.

That hot dog stand on the side of the road. Result: A bacteria so vicious that it beats your insides with a mace.

Superglue. Result: A myth about its use in wound care.

The highly classified alien project superglue leaked out of Area 51 because some punk paid off a guard, and the glue landed in the hands of medical personnel in the Vietnam War.

Medic 2: "Nope, too much work. Heck, with all the gunfire raining down over our heads, who has the time. But, look I've got some alien superglue."

Hence the discovery of superglue for wounds.

Seriously though, during the Vietnam war, medics did find that superglue was made of a substance called Cyanoacrylate, which made a great wound adhesive. When the substance comes in contact with liquids, it forms a plastic mesh, thus sealing off wounds.

Now, I can really see the benefit of sealing up a wound at lightning speed, especially when bullets and mortars are your surgical background music. But over a time, they discovered that superglue had some side effects and decided that it shouldn't be used all the time. Unfrotunately, the rest of society are struggling with the lazy gene and believe superglue is good for everything.

And now, superglue has become the 21st century prepper's* version of the "band-aid." I don't think I have heard of a disaster preparedness kit yet, that doesn't have superglue in it attached to the belief that one can put superglue on pretty much any type of wound that needs suturing.

I hate being a myth buster. I love myths. The myth about a dorky nerd flying on Pegasus to chop the head off a chick so ugly that looking at her turns you to stone is a great myth... that I can believe. But the myth about superglue being a great wound adhesive is just going too far. 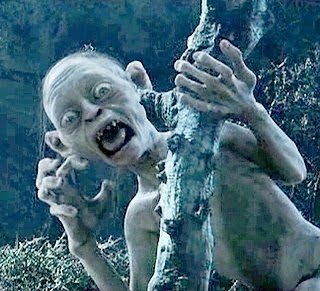 The superglues out on the market today also contain a chemical called methyl alcohol, which releases energy in the form of heat during the formation of the adhesive. Therefore, because of this exothermic reaction, the good periwound tissue receives a chemical burn that destroys the granulation buds, thus preventing correct wound healing.

I figure this is what happened when Golum started screaming, "It burns us! It burns us!"

What you didn't see was that in a earlier edited scene Golum fell on his buck-naked butt, getting a wound the size of Gibraltor on his scrawny cheek.

Then a wise guy said, "Let's put superglue on it." That's when you see Golum running around, "It burns us! It burns us!" It's in the unofficial director's cut.

To prevent this chemical burn a medical grade superglue (tissue glue) that it is also a form of cyanoacrylate has been developed. This glue has no exothermic reaction and has added ingredients possessing bacteriocidal effects, such as either butyl, octyl, or isobutyl derivatives.

Now, I'm not saying that you have to dig through your gia-normous, end of the world trauma kit and throw out your superglue. You can still use it, if you don't mind the burning sensation...

NEVER use superglue on a wound that is deep into the body... seriously bad idea to chemical burn deep tissue. Healing will be delayed on a whole new level.
Don't glue your finger to your patient. That's not good in the wilderness. It can be laughed at in the hospital, but in the wilderness, you might end up pulling a Coyote Ugly.

The Minor Leagues are better. If you are going to use superglue to close a wound, you should probably use it on a minor wound that is straight and of which the skin flaps easily close back together.

Well, I better end my blogging for today. TTFN.